Uganda is currently host to over 1.3 million refugees, mainly from South Sudan and DRC, but who knew that during WWII the country hosted thousands of refugees from Poland? On a recent trip to Masindi, I spoke to a long term resident who told me about the camp which was on the site of the current Forestry School at Nyabyeya, just to the west of Masindi. If you look on Google Maps  you will see the improbable church of Our Lady Queen of Poland Catholic Church, in the graveyard of which are 43 graves (a list of those buried there can be found on this webpage) renovated in 2010 by Polish students. The church was built in 1943-5 by the Polish refugees living in the camp and is still being used by the local community although none can now understand the Polish inscriptions. The refugees also built themselves huts and schools and created a community in an alien environment.

Just after our return from Masindi, I coincidentally read about an exhibtion at the Uganda Museum about Polish refugees in Uganda to mark the 75th anniversary of their arrival! Such serendipity! The exhibition consisted of a number of story boards  telling the story of the refugees.

How did thousands of Poles end up in Uganda? In the early years of WWII Stalin’s Russia invaded eastern Poland and soon after deportations of Polish civilians began. They were transported east to labour camps in Siberia and Kazahstan where conditions were harsh and food scarce. After the Yalta conference during which the Russians joined the Allies, a Polish army was to be raised in southern Russia under the command of General Wladyslaw Anders. As men were allowed to move south to join the army, so too families moved in the hope of being allowed to leave the Soviet Union. In two phases during 1942 thousands of Poles travelled, with difficulty, overland or across the Caspian Sea to camps near Tehran. From these camps the men joined the army and the women and children were dispersed to a variety of places, some to Mexico, most others to safe havens in the British Empire, India/Pakistan, east and southern Africa. Ships took them first to India/Pakistan  and from there to ports in Africa. Those who made homes near Masindi travelled overland from Mombasa to Lake Victoria, across the lake to Jinja and then on barges up the Nile to Masindi Port and finally overland to Nyabyeya.

The first arrivals had to clear 50 hectares before construction could begin. Trees were felled for timber to make houses and furniture. The refugees had to make the most of skills among their number. Many were still sick from their arduous journey and harsh conditions and now had to deal with tropical diseases as well. Dr. Jadwiga Zielinska set up Masindi hospital which was kept busy. It seems that the children adapted quickly to the new environment while their mothers saw the dangers of the insects, snakes and animals. The settlements soon established schools and youth activities such as scouting were popular and occupied the children. They grew vegetables, made clothes and kept their Polish traditions. The schools were well staffed because many of those deported by Stalin were the ‘intelligensia’ and many of these people taught the children.

The video below suggests that some structures survive, but as one comment says the refugee buildings are more likely to have been thatched. It is good to see a surviving water pump still functioning. The local population interacted with the Poles, particularly in selling them food, as one man describes, he helped raise his school fees by selling mangoes to the Poles.

Another group, of mainly orphaned children, was sent to Koja, south of Mukono (east of Kampala) where a camp was built in a beautiful setting overlooking Lake Victoria. After the war this camp was raised and returned to farmland and there is little evidence of it remaining apart from a few graves.

Once the war was over the Poles were disbursed to Canada, Australia and UK, very few elected to return to their homeland and only a small number remained in South Africa. Some have written accounts of their ‘adventure’ such as Lucjan Krolikowski who additionally relates how some orphans, who were required by the new Polish Government to be repatriated, were taken instead, via Italy and Germany, to Canada. Another account is ‘From the Steppes to the Savanna‘ by Barbara Porajska who lived in the camp near Masindi and fondly remembers a trip to Murchison Falls. The reminiscences of many Polish people who ended up living in Birmingham, UK were recorded in a project. Here are two who lived in Uganda: 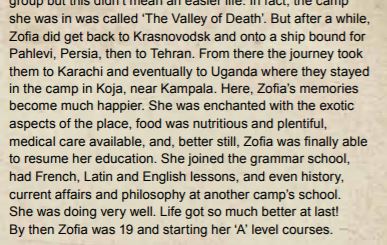 A personal account of refugee life with great photos can also be auto-translated. An excellent article here can also be translated to English by Google or other web browser!

Below is a video of the Polish students visiting graveyards for renovation work in 2010 with Polish subtitles – around minute 5 they arrive in Uganda going first to Koja then around minute 10 to Masindi :

They worked hard to clear vegetation, find remants of old graves and repaint the monuments they found.

If you are interested in following the footsteps of the Polish refugees in Uganda, you can even take a safari to visit all the relevant sites: http://www.travelust.com/polish-uganda-safari#prettyPhoto

According to this book, the Poles were not the only Europeans brought to Uganda during the war; 4000 Italian prisoners and 1200 civilian internees were also in camps here. According to this source there were camps in Jinja, Kampala and Soroti. An amusing story documented in ‘No Picnic on Mount Kenya‘ describes three prisoners who escaped from a camp in Kenya and climbed Mount Kenya with little equipment or food, then broke back into the camp. Their punishment was commuted by the camp commander in recognition of their ‘sporting effort’!

Apart from this small comment on a website: “Among other things, this led to the construction by Italian POWs of a flax factory, using the power from the 90 foot Omukinyata Waterfalls, near the hamlet of Kisiizi.” it is hard to find out much information. Feel free to add any in comments if you know more!

11 thoughts on “Polish refugees in Uganda”

Named 'the Pearl of Africa' by Winston Churchill in 1908, Uganda lies on the equator on the north shore of Lake Victoria in East Africa. Population in 2013 37.58m. Currency: Ugandan Shilling
Follow Impressions of Uganda on WordPress.com